The Benefits of Drinking Aloe Vera 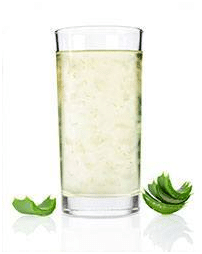 Many people already know the benefits of using Aloe Vera cream on their skin: soothing minor burns, moisturizing the skin, and calming inflammation to name a few.

A growing number of people have begun talking about the benefits of drinking Aloe Vera liquid. And they’re not alone. Multiple scientific studies suggest that Aloe Vera can aid in digestion, in addition to other health benefits.

A study compared people using Aloe Vera syrup versus traditional medications for gastric reflux disease, otherwise referred to as heartburn. They found that Aloe Vera was safe, well-tolerated, and reduced the frequencies of symptoms associated with reflux.

Some people hope that because Aloe Vera has helped with inflammatory bowel disease that it will help with other digestive issues, like Irritable Bowel Syndrome (IBS). Unfortunately, Aloe Vera juice has not been shown to alleviate symptoms in people suffering from IBS.

Aloe Latex as a Laxative

It can act as a potent laxative. Its long-term effects have not been studied, so it hasn’t been approved by some government agencies as a laxative. However, it can be found as a nutritional supplement with these properties.

There is a myth in some wellness circles that there are acid- and alkaline-forming foods that can change your health. However, there are no studies that even test, let alone validate, this theory. The body has many mechanisms to protect the delicate pH balance of the blood. It’s unlikely that eating specific foods in normal quantities would change the pH of the blood.

Another popular myth is that certain foods can “detoxify” the body. The body already has organs whose sole purpose is detoxification, like the kidneys and the liver. Toxins don’t build up in the body or in these organs, so eating certain foods to “detoxify” doesn’t make any sense.

Aloe Vera has many benefits. While many people already know about the benefits of using Aloe Vera on their skin, more and more people are recognizing the digestive benefits it has. From relieving symptoms of gastric reflux to improving blood sugar in diabetic patients, Aloe Vera can help you achieve your health goals.

At Aloe Vera Westcoast, we specialize in farming the purest version of Aloe Vera in South Africa. Check out our website to learn more about other ways you can incorporate Aloe Vera into your life!

This site uses Akismet to reduce spam. Learn how your comment data is processed.